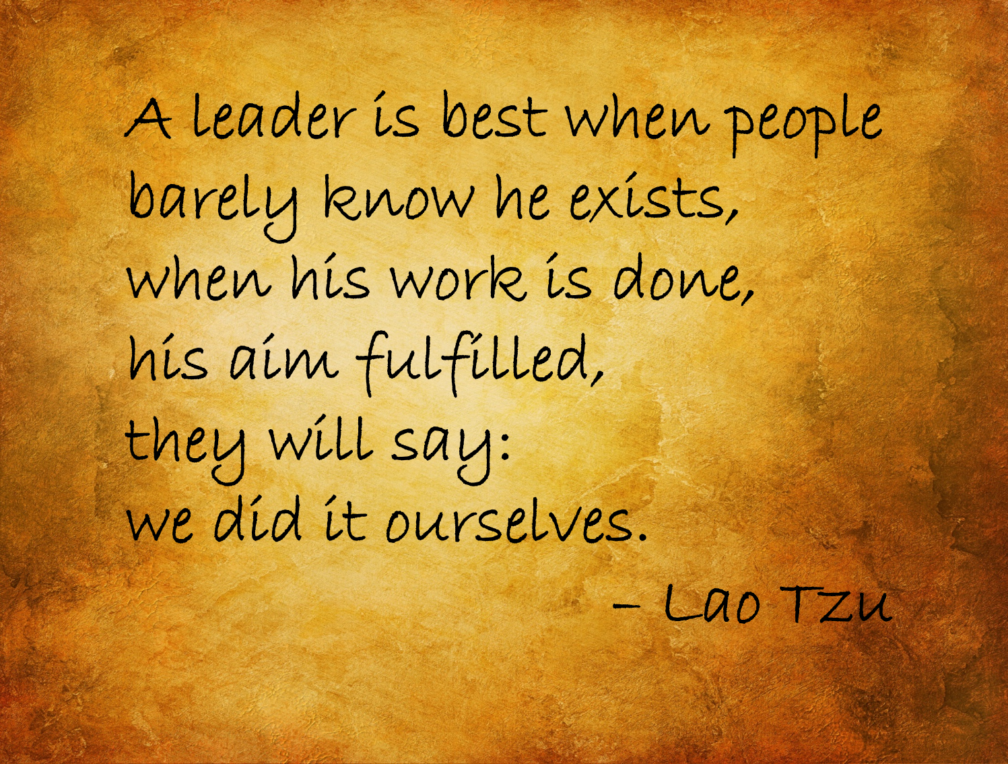 The function of leadership is to produce more leaders, not more followers. – Ralph Nader Leadership is lifting a person’s vision to higher sights, the raising of a person’s performance to a higher standard, the building of a personality beyond its normal limitations. – Peter Drucker

There are two sure ways to fail: never get started and quit before you succeed. Many companies promote the language of risk-taking and innovation but are so concerned with short term profit goals that their culture discourages innovation (trying new things) and abandons promising projects too soon. It shouldn’t require exceptional moral courage to try new things and stick with them. – Michael Josephson

A leader is best when people barely know he exists, when his work is done, his aim fulfille, they will say: we did it ourselves. – Lau Tzu

Management works in the system; leadership works on the system. — Stephen R. Covey

No leader or organization can achieve breakout growth until it treats, “we’ve always done it this way” as an opportunity to think anew rather than as a reason to stop thinking. Keep in mind, tradition should be a guide, not a jailer. – Michael Josephson

The most important thing in communication is to hear what isn’t being said. – Peter Drucker Leadership is not a matter of authority, it is a matter of influence. A true leader teaches others to understand more, motivates them to be more and inspires them to become more. -Michael Josephson

One key to success is demanding more than adequacy, never settling for good enough and always doing a little bit more. – Michael Josephson

If your actions inspire others to dream more, learn more, do more and become more, you are a leader. – John Quincy Adams

Someone who lies for you will also lie to you. The occasional benefit your business may gain from a successful deception or concealment is always outweighed by the encouragement it provides to those willing to risk trust for success. – Michael Josephson A lie may take care of the present, but it has no future. ~Author Unknown

Using the phrase business ethics might imply that the ethical rules and expectations are somehow different in business than in other contexts. There really is no such thing as business ethics. There is just ethics and the challenge for people in business and every other walk in life to acknowledge and live up to basic moral principles like honesty, respect, responsibility, fairness and caring. – Michael Josephson

Integrity has no need of rules. – Albert Camus