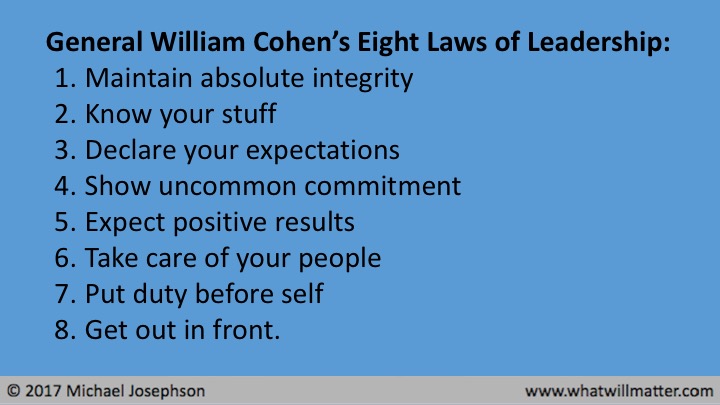 Take a look around. Business, education, politics. If there’s one thing we don’t have enough of, it’s good leaders —men and women who have the vision and the ability to change things for the better.

Former Air Force General William Cohen wrote a fine book called The Stuff of Heroes in which he identified eight laws of leadership. Here are his rules:

His laws embrace important competencies like knowledge, communication skills, commitment, optimism, caring, and a powerful sense of duty. But General Cohen also recognized that the foundation of a successful leader is character, including trustworthiness, honor, and courage.

The best leaders draw on these moral qualities to influence others through inspiration, persuasion, trust, and loyalty. They do the right thing despite the costs and risks and do it not because it will yield approval or advantage, but because it’s the right thing.

In these cynical times, it’s easy to think such leadership is unattainable; yet in every walk of life there are hundreds of men and women —parents, teachers, coaches, civic activists — who fit this mold. What’s more important, every one of us could be among them.