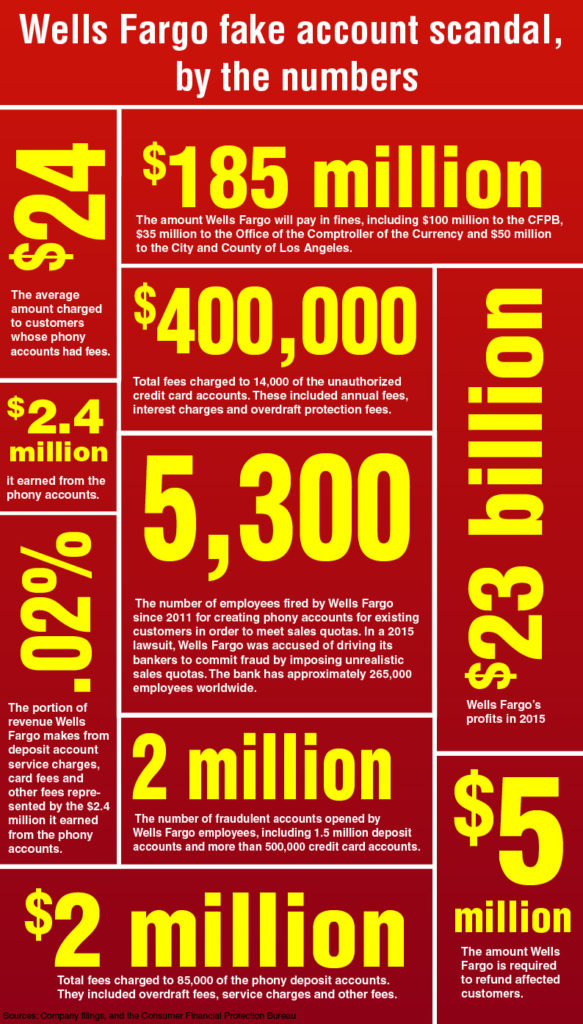 Wells Fargo had been my bank for some time. So when I began to read about the pervasive corruption of its culture in late 2016, I was troubled. But I hadn’t seen any misconduct in my dealings and I liked the people I was working with so I just assumed, selfishly and naively, that this has nothing to do with me.

Then I discovered a savings account I didn’t want and unauthorized and excessive charges. While the bank was quick to correct it when pointed out the problem it was clear that if I had not called it to their attention I’d still be paying. Shortly thereafter, when I found my account was victimized by check forgeries, the way Wells Fargo management handled the issue revealed sharp policies and questionable practices that can only be explained by a corporate culture consumed with the imperative to maximize profits – at any cost. It completely destroyed my trust, inducing me to leave the company with a feeling of disappointment and betrayal.

This personal experience is pertinent only because it is indicative of how extensive and corrosive a bottom line mania can be to an institution, even one as large and grand as Wells Fargo. I was reminded of this the other day when I saw a new article at CNN Money with this lead: “Six months after the fake account scandal erupted, Wells Fargo still faces more than a dozen investigations, inquiries and lawsuits related to its notorious sales tactics and alleged mistreatment of workers.” http://money.cnn.com/2017/03/31/investing/wells-fargo-investigations-fake-account-scandal/index.html?sr=twCNN040117wells-fargo-investigations-fake-account-scandal0516AMStoryLink&linkId=36070996.

A quick reminder of the basic facts:

It started with a short unexplained press release issued by Wells Fargo on September 8, 2016 indicating the company had come to a settlement government authorities requiring it to pay $185 million. Further inquiries uncovered the facts that for more than 5 years the Wells Fargo induced and coerced employees to fool or cheat about two million customers. In the end, more than 5,300 employees had been fired, but no senior executives had been terminated. In fact, according to Fortune Magazine, “the executive who ran the retail unit where the infractions had occurred had been scheduled for a December 31 “retirement,” complete with a $128 million send-off package.” http://fortune.com/2016/10/14/wells-fargo-john-stumpf-scandal/

The numbers are staggering and worth emphasis: 1) the clearly improper business practices went on unnoticed by management for five years! 2) The improper conduct affected 2 million customers! 3) More than 5,000 employees who were acting under instructions from the company were fired! 4) No senior executive was fired, let alone prosecuted.

The simple fact is that for a company that made $23 BILLION profit in 2015 the financial cost of this debacle is truly insignificant. It remains to be seen whether the the reputational loss will induce management to to re-assess and re-vitalize its culture.

How this happened to a company that has been around since 1852, how it might happen to any company should be a major case study in every business school.

Fortunately for Wells Fargo, the continuous tumult of the recent Presidential campaign and early days of the presidency have not left much room for a full discussion of the perniciousness and pervasiveness of this world class ethical meltdown of historic proportions. Even a few days of publicized Congressional hearings did not make much of a dent on public consciousness.

Though the company’s troubles are not over, it appears that Wells Fargo’s struggles will continue to escape major news coverage and, unlike the iconic accounting firm Arthur Andersen which did not survive the Enron scandal, it appears that Wells Fargo will emerge wounded but viable. If what I’ve seen recently is any example, however, the core business philosophy that spawned its recent woes remains intact and it may be only a matter of time before we see more negative headlines.