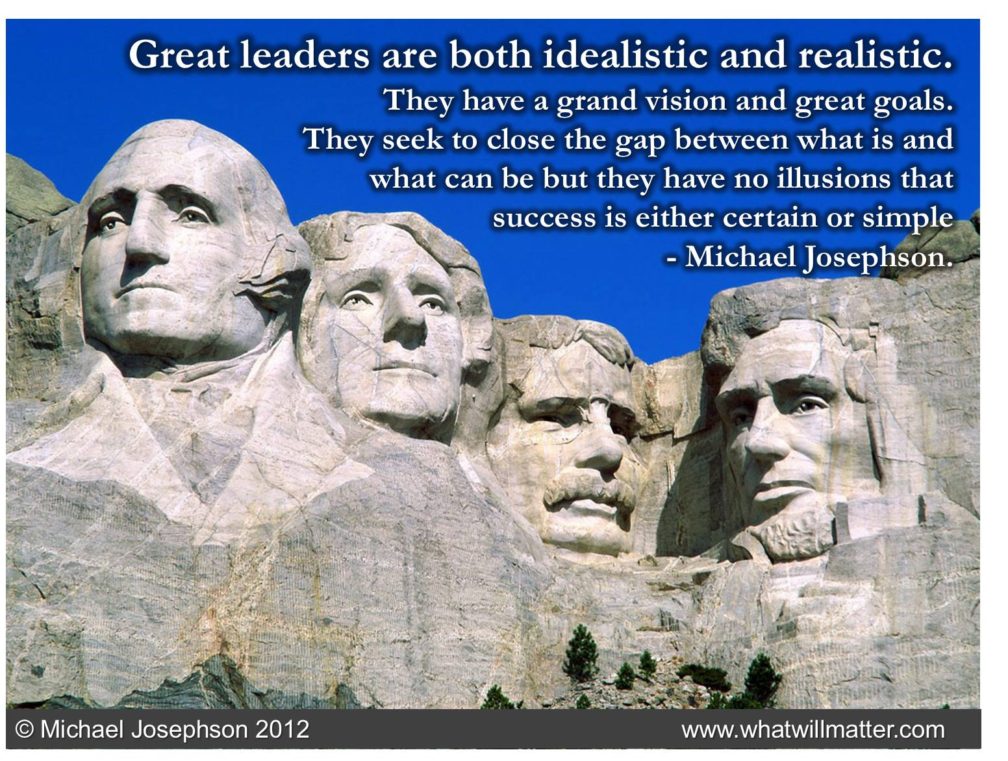 Successful leadership is not about being tough or soft, assertive or sensitive. It’s about having a particular set of attributes – which all leaders, male and female, seem to share. And chief among these attributes is character.

E.B. White once said, “I wake up every morning determined both to change the world and have one hell of a good time. Sometimes this makes planning the day a little difficult.” Every leader today shares a similar wake-up call and charge – both to change the world and have a good time doing it. But I would add an important footnote: the noble mission of the leader can’t be used to justify the means. In the leadership arena, character counts. I’m not saying this casually. My convictions about character-based leadership come from years of studies, observations, and interviews with leaders, and with the people near them.

Most organizations evaluate their executives and managers using these seven criteria: technical competence or business literacy (knowledge of the territory); people skills (capacity to motivate people); conceptual skills (ability to put things together); results (track record); taste (capacity to choose terrific people most of the time); judgment (ability to make wise decisions in a fog of reality and uncertainty); and character (integrity to walk the talk).

Of all these, we know the least about judgment and character, including how to “teach” them. That’s a shame, because I’ve never seen a person derailed from a position for lack of technical competence. But I’ve seen lots of people derailed for lack of judgment and character. The stakes are high for the individual, the organization and the country, so it’s worth knowing more about the character-component of successful leadership.

Character isn’t a superficial style. The word comes from the ancient Greek verb meaning “to engrave” and its related noun meaning “mark” or “distinctive quality.” Character is who we essentially are. I also believe, however, that our character is continuously evolving. Unlike some of the Freudians, I don’t think character is fixed at age six. I think we continue to grow and to develop. The corollary of this is that the process of becoming a leader, to me, is much the same process as becoming an integrated human being. I see a real connection between what it takes to be a leader and the process of character growth.

Leaders have vision and a strongly defined sense of purpose, they inspire trust, and they work for change Thus one way to define leadership is as character in action.

To communicate a vision, you need more than words, speeches, memos and laminated plaques. You need to live a vision, day in, day out – embodying it and empowering every other person to execute that vision in everything he or she does, anchoring it in realities so that it becomes a template for decision making. Actions do speak louder than words.

I can’t exaggerate the significance of a strong determination to achieve a goal – a conviction, a passion, even a skewed distortion of reality that focuses on a particular point of view. And the leader has to express that determination, or purpose, in various ways. There can be many different purposes. Michael Eisner once told me that Disney didn’t have a “vision statement,” but rather a strong “point of view” about the Disney culture. When making big decisions, Eisner says, “the strongest point of view almost always wins the argument.”

Max DePree, the former CEO of Herman Miller, once said, “The first task of a leader is to help define reality.” That’s another way of talking about purpose. Without a sense of alignment behind a purpose the organization will be in trouble, because the opposite of having purpose is drifting aimlessly. And it can’t be any old purpose if it is to galvanize and energize and enthrall people. It has to have meaning and resonance.

There’s no reason why that persuasive point of view can’t be an ethical one. Do you want a more ethical organization and society? Then show leadership when decisions are being made, and be a forceful, committed advocate for ethics. Your deeply held point of view may carry the day.

But there is also a danger in presenting a strong point of view: it can intimidate others and shut down communication, and that’s deadly for character and for effective leadership.

A leader needs candor to operate effectively. Unfortunately my studies show that seven out of ten people in organizations don’t speak up if they think their point of view will vary from the conventional wisdom or their boss’s point of view – even if they believe their boss is going to make an error. What a leader needs to cultivate are firm-minded subordinates with the wisdom and courage to say no. That means the leader needs to be trusted as a fair and honest person of integrity, someone who does not kill the messenger who tells the truth.

Real leaders, and people of strong character, generate and sustain trust. I can’t overemphasize the importance of encouraging openness, even dissent. An executive once wrote to me that his organization had “thousands of folks, union workers, who want the world to be the way it used to be, and they are very unwilling to accept any alternative forecast of the future.” The problem was that there was no trust in that organization. This executive was an old-fashioned control-and-command type who never could regenerate trust among the key stakeholders. The union members were not the problem in this case.

Leaders must be candid in their communications and show that they care. They have to be seen to be trustworthy. Most communication has to be done eyeball to eyeball, rather than in newsletters, on videos, or via satellite. One of the best ways to build trust is by deep listening. People’s feeling that they’re being heard is the most powerful dynamic of human interaction. Listening doesn’t mean agreeing, but it does mean having the empathic reach to understand another.

To trust others, to have confidence in them, people of course also need to see evidence of competence. Yet another indispensable aspect of character, and leadership, is constancy. One of the things you hear about the least effective leaders is that they do whatever the last person they spoke to recommended or that they plunge forward with the latest good idea that pops into their heads. Before they can trust a leader, followers have to know what to expect. So sometimes leaders have to put off their grand ideas or glorious opportunities until they have had a chance to convince their allies of the ideas’ value. In business, as in politics, the effectiveness of a decision is the quality of the decision multiplied by the acceptance of it.

What employees want most from their leaders is direction and meaning, trust and hope. Every good leader I have spoken with has had a willful determination to achieve a set of goals, a set of convictions, about what he or she wanted the organization to achieve. Every leader  had a purpose. Remember what hockey great Wayne Gretzky says, “It’s not where the puck is that counts. It’s where the puck will be.” Character counts because, in the leader, character is having the vision to see things not just the way they are but the way they should be – and doing something to make them that way.

Leaders have a bias toward action. They have the capacity to convert purpose and vision into action. It just isn’t enough to have the great vision people can trust. It has to be manifest in some external products and results. Most leaders are pragmatic dreamers or practical idealists (even though those descriptions may seem like oxymorons). They step up and take their shots every day, perhaps knowing that “you miss 100 percent of the shots you don’t take,” to borrow another line from ice-rink philosopher Gretsky.

“Strike hard and try everything,” wrote Henry James. You’re never going to get anywhere unless you risk and try and then learn from each experience. Leaders have to play even when it means making mistakes. And they have to learn from those mistakes.

Companies are the direct reflection of their leaders. All the leaders I know have a strongly defined sense of purpose. And when you have an organization where the people are aligned behind a clearly defined vision or purpose, you get a powerful organization. Effective leaders are all about creative collaboration, about creating a shared sense of purpose. People need meaningful purpose. That’s why we live. With a shared purpose you can achieve anything.  And that’s why a central task for the leader is the development of other leaders, creating conditions that enhance the ability of all employees to make decisions and create change. The leader must actively help his or her followers to reach their full leadership potential. As Max De Pree once put it: “The signs of outstanding leadership appear primarily among the followers.”

We need more leaders, not managers. Leaders are people who do the right things. Managers are people who do things right. There’s a profound difference. When you think about doing the right things, your mind immediately goes toward thinking about the future, thinking about dreams, missions, visions, strategic intents, purposes. When you think about doing things right, you think about control mechanisms. You think about how-to. Leaders ask the what and why questions, not the how questions. Leaders think about empowerment, not control. And the best definition of empowerment is not stealing responsibility from people. Grace Hopper, a management expert who was the first woman admiral in the U.S. Navy, has said, “You manage things, but you lead people.”

How do you go about becoming a good leader? Figure out what you’re good at. Hire only good people who care, and treat them the way you want to be treated. Identify your one or two key objectives or directions and ask your coworkers how to get there. Listen hard and get out of their way. Cheer them. Switch from macho to maestro. Count the gains. Start right now.

*Warren Bennis is distinguished professor of business administration and founding chairman of the Leadership Institute at the University of Southern California. He is the author or editor of more than 25 books on leadership, change management, and creative collaboration. More than 1 million copies of his books are currently in print. He consults with global corporations as well as political leaders. His book Leaders was named one of the 50 best business books of all time by Financial Times. Forbes magazine has called Bennis the “Dean of Leadership Gurus.” His book Organizing Genius: The Secrets of Creative Collaboration explores one of his abiding interests: how leaders can create the social architecture that generates intellectual capital.

This article is reprinted from Josephson Institute’s The Power of Character, which includes diverse essays from a variety of accomplished and interesting people.